I HAVE NO PLANS TO RETIRE!

Best way to reach me is by email at

2nd Best way to reach me is to text or call my cell phone at:

If you call me I may not answer my phone immediately

but will endeavor to answer your voicemail message

as soon as possible.

A George III Art Case Piano Forte  in the neoclassical style: Features a fine Vernis Martin lid painting of the Goddess Athena attended by the Three Muses. Depicted from left to right are Melete strumming the lyre, Athena at rest with helmet and shield, Mneme memorizing verse and Aeode with lyre in hand. This is an exquisite example of neoclassic allegorical painting, very skillfully executed in a similar style to that of Angelica Kauffman (1741-1807).

The intricate border artwork includes fine profile portraits that could well be of the original Eighteenth Century ladies of the estate for which this piano forte was commissioned.  A number of oval insets of angelic cherubs dancing and playing instruments add humor and musical interest. Fine floral embellishments, ribbons and swags, griffons, a classical urn and six finely decorated Hepplewhite style legs complete the fine classical art enhancements of the piece.

1790s rare Geo III Piano Forte in a fine art case: This is an incredibly fine piece of late 18th century artwork in a piano forte case. This was originally a five octave instrument but the piano parts have been removed from the interior, except for the genuine whalebone damper springs, nut and hitchpin block.

The case and lid parts are completely intact and have not been cut or modified like many of these that have been converted into a desk or sideboard. This would be the perfect art case to fit a keyboard, action and soundboard right into. The case is in fine shape with no warpage, the interior wood all appears clean and fresh.

This pianoforte came to me fitted with a James Longman nameboard, but this appears to be the result of a later "marriage" and does not appear to be original with the piano. It is however a fine piece of artwork in its own right. Measurements and the inlay of the keywell sides would indicate that this piano forte is from the early 1790s, however the nameboard appears to be from the late 1790s.

There is a very similarly decorated but five and a half octave Goulding, D'almaine and Potter in the Belle Skinner collection, so it is possible that this piano is an earlier Goulding creation but this would take some sleuthing to try to positively identify the maker.

Athena and the Three Muses

Here are some thoughts on the artwork on the 1790s George III Art Case Piano Forte.  Careful analysis indicates that the theme of the lid painting was based on the Hendrick van Balen (1575-1632) pianting, Minerva (Athena)  and the Nine Muses". 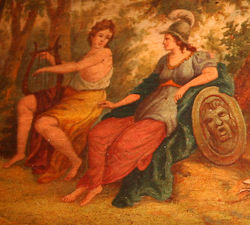 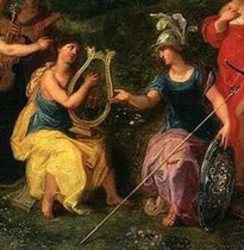 Similar detail of Athena and Muse from the van Balen work.

This is a very rare and precious early keyboard instrument case of highest museum quality.